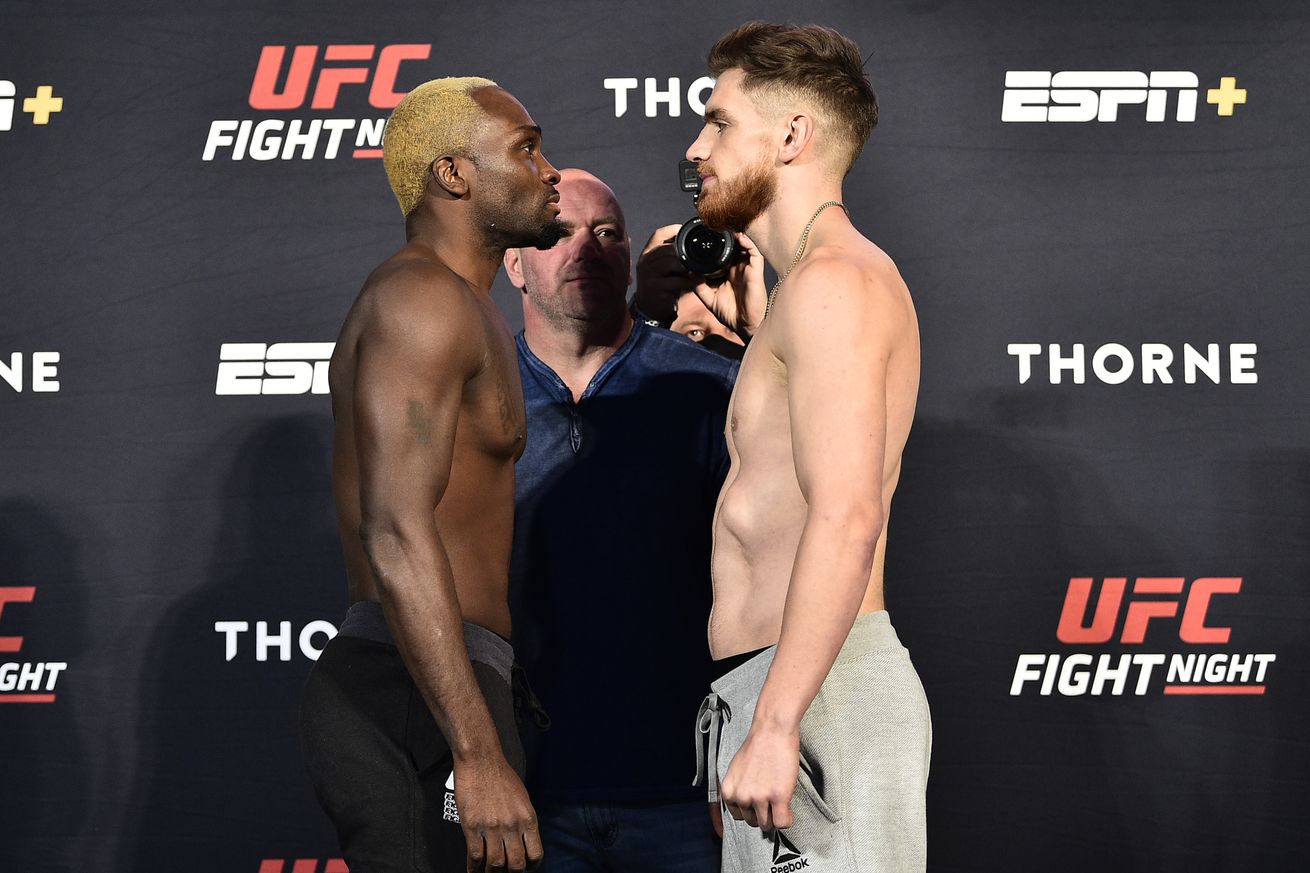 Live, blow-by-blow updates for today’s UFC event in Vegas on ESPN+, which features a middleweight tilt on top.

Join us today on Bloody Elbow for live results, discussion, round scoring, and full play-by-play as UFC Vegas 5 goes down in UFC Apex in...well, Las Vegas.

The headliner comes in the middleweight division, with Derek Brunson taking on Edmen Shahbazyan. The co-main might end up being a top contender’s bout in the women’s flyweight division with Joanne Calderwood facing off with Jennifer Maia.

This card has been ravaged by COVID and a variety of other issues, and is now down to nine fights total with the super late removal of Gerald Meerschaert vs. Ed Herman. GM3 tested positive for COVID.

This is an ESPN+ show and is kicking off later than usual due to being so light on fights. The four-fight preliminary card is scheduled to start at approximately 7pm ET/4pm PT. The five-fight main card will kick off at 9pm ET/6pm PT on ESPN+.

Note - Trevin Giles vs. Kevin Holland was cancelled due to Giles feinting while preparing for the fight. We’re down to a four-fight main card.

Round 3 - Shahbazyan is up and ready to figth but the doctor will check on him. He is able to continue, but for how long? Brunson with a lead left and he drags Shahbazyan to the mat. He lands two more shots and Herb Dean waves it off.

Derek Brunson defeated Edmen Shahbazyan via TKO (strikes), :26 of round 3

Round 1 - They trade inside. Calderwood with a couple of low kicks. Calderwood with a nice left and an inside leg kick. Maia with a good combo. Overhand right scores for Maia. Front kick from Jojo. Knee to the body from Maia, but she eats a right hook on the break. Jojo with a head kick. Maia with a stiff combo. Maia wades in with another combo. Body kick from Calderwood. She catches a kick and dumps Maia to the mat. She settles in to work from the top against the cage. Maia is scooting and traps an arm. She’s looking for an omoplata or triangle, but There’s nothing there. She locks up a high full guard. Maia trying to transition for an armbar now. Calderwood is stacking but falls over the top and she’s stuck. She taps!

Jennifer Maia defeated Joanne Calderwood via submission (armbar), 4:29 of round 1

Round 1 - Couple of jabs from Brown. Spins and misses. Luque with low kicks. They both jab. Brown with two inside leg kicks. Luque kicks low. They trade outside leg kicks again. Inside leg kick from Luque. He wades in with a right hook and a straight left. Body shot from Brown. Big right hook from Luque and Brown is hurt! Brown recovers and is back on his feet. Luque with more kicks. Brown tries to reestablish the jab. Luque with a shot that staggers Brown, he has to grab the cage to stay on his feet. Brown looks for a half-hearted takedown. Nothing there. Jump knee from Brown. 10-9 Luque.

Round 2 - Ouch. Low kick from Luque right to the cup right away. Cornuts cam confirms. Amazingly, Brown is ready to go pretty much right away. They throw down in the pocket. Luque chops Brown down with a leg kick. He’s back up quick. Lead left hook from Luque. Jab from Brown, but he’s on the back foot. Luque really bringing pressure. Slapping low kick and a straight left from Luque. Winding uppercut from Brown. They battle in the clinch briefly. Body kick from Luque, and Brown spins with an elbow that lands. Brown is turning up the offense now. Long punches and knees inside. Luque with his own knee, and hes’ upping the workrate as well. Brown with a beautiful body lock takedown with a minute left. Luque spins up quickly. Low kick from Luque. They trade kicks. Luque with a huge knee as Brown was leaning over! That might have been illegal! Brown is hurt and it’s over! Wow. I think they might review this. Initially it looks legal because Luque actually held him up to land the knee before Brown could ground himself with his hands.

Vincente Luque defeated Randy Brown via KO (knee and punches), 4:56 of round 2

Round 1 - Front kick to the body from Green. Vannata with a nice counter combo. Body kick too. Head kick is blocked. Vannata goes body/head. Jab. Green looks slower than usual so far. Low kick from Green though, and again. Vannata to the body, and a right hook. Green with his own right hook. Vannata catches a low kick and lands another right hook. Green touches up the body. Jabs too. Low kicks from Vannata. Right hook from Green and Vannata goes down! He might have just been off balance, but still. He’s up but Green catches an immediate kicks and gets in close. Vannata spins and takes his back, but they reset quickly. Green with a right and they brawl in the phone booth with huge shots! Both have their hands down and they’re just looking for big shots. Green with a very nice combo. All that slowness earlier is gone. 10-9 Green.

Round 2 - Vannata looks for a body lock, but disengages and misses with a head kick. Green is fighting with his hands down by his knees, as usual. Low kick from Green. Again. Nice lead jab. Jab with the other hand. Nice 1-2 back from Vannata. Front kick from Green. Head kick from Vannata is blocked. Green tries to wrestle and Vannata is trying for a guillotine. Green expertly passed to side to defuse it, then pops back into guard when he releases it. They’re back up with two minutes to go. Double jab from Green, and a low kick. Nice lead left. Vannata kicks low. Vannata with a sweet lead right. Green fires back. Nice jab from Green. Vannata ties him up and takes Green down with 50 seconds to go, but Green is up quickly. Low kicks from Green. They’re very similar fighters. Vannata misses with a wheel kick. Vannata catches a kick and lands a right hook. 10-9 Green.

Round 3 - Green off to a quick start. Vannata gets inside but eats two knees. They throw down and Green drops Vannata with a picture perfect counter right hook! He’s dropping elbows and punches in Vannata’s guard. Vannata attacks a leg and uses the opportunity to get up. Green with a shovel hook to the body, and another counter right hook! So pretty. Green with a half-hearted attempt at a takedown and Vannata immediately drops for a guillotine attempt. Nothing there though. Green works over Vannata a bit from half guard. Green briefly spins to his back for a choke attempt, then secures a front headlock. Vannata pops out and back to his feet with 90 seconds to go. Green goes to the body. They club each other with right hooks. Vannata with a glancing head kick. Jab from Green. 1-2 from Green. Vannata with a counter right hook. Great fight. 10-9 and 30-27 Green.

Jonathan Martinez defeated Frankie Saenz via TKO (strikes), :57 of round 3

Juve crash on season finale, Inter second in Serie A