Stagnate, iso-dominate offense does Celtics in late in Game 1 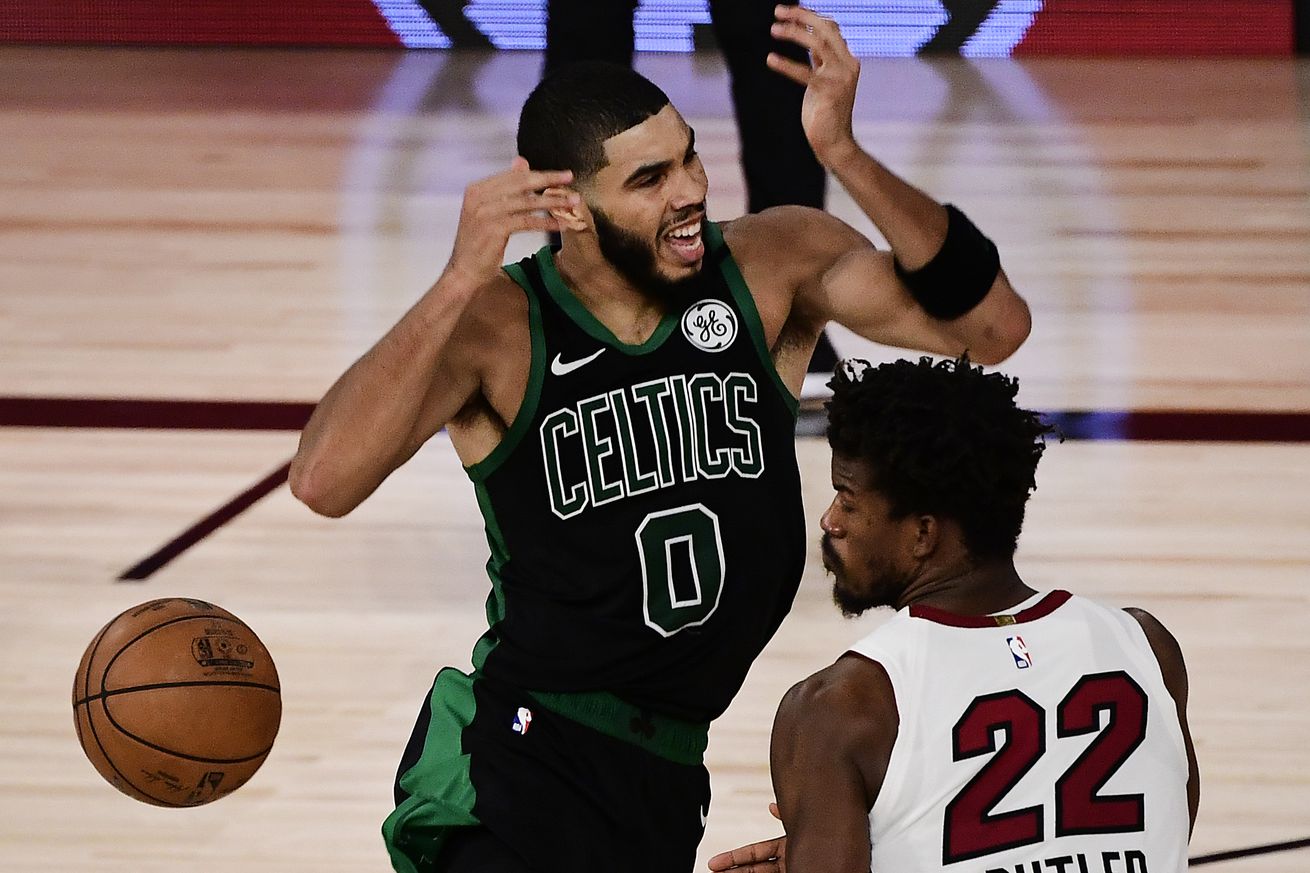 The Celtics turned to iso-ball to close out the Heat and it didn’t work.

The Boston Celtics offense in the latter stages of the fourth quarter and overtime didn’t resemble what it looked like through the first 36 minutes of Game 1 of the Eastern Conference Finals.

After strong ball movement and unselfish play helped the Celtics breakdown the Miami Heat defense en route to a 14-point lead early in the fourth quarter, Boston went to a completely different offensive style that wasn’t nearly as effective.

The Celtics went to an iso-dominate offense to try to close out the Heat, with Kemba Walker or Jayson Tatum getting the ball at the top of the arc, dribbling the shot clock down to its waning seconds with four teammates serving only as onlookers before taking a contested shot.

The result of the lack of execution on the offensive end during crunch time proved pivotal as it allowed Miami to fight its way back and ultimately overtake the Celtics to earn a 117-114 win in overtime.

“We’re going to have to figure out better ways to attack, especially late,” said Celtics coach Brad Stevens. “I thought we really moved it at times and then we did get stagnate.”

Some tough offensive possessions down the stretch for Boston. Some of it was Miami's defense and some of it was the Celtics settling or reverting to isolations. No reason to panic, but not the way Boston wanted to close this one. pic.twitter.com/BFJkF77A62

Marcus Smart, who poured in 26 points and knocked down 6-of-13 3-pointers, agreed with his coach and believed the Celtics got too comfortable with their double-digit advantage.

“(The offense) got stagnate,” Smart said. “We rushed it. We got complacent and against a team like this you can’t get complacent.”

The late-game iso-ball was a stark contrast to what the Celtics’ offense can achieve when they are moving the basketball. Here’s an example from early in the fourth quarter as Smart’s cross-court pass helped the Celtics defeat the zone defense Miami went to on occasion.

But there was little of that pristine ball movement and attacking the rim from there on. The Celtics settled for Walker or Tatum pounding the ball into the court until they were ready to make a move at the last second with Miami’s defense locked in on the ball-handler. A contested jumper usually followed, which is a win for Miami’s defense, especially with Walker shooting as poorly as he did.

“We just got to be more consistent,” Tatum said. “Continue to do what got us the lead. I think we shied away from that a little bit and allowed them to get back in the game.”

Too much isolation down the stretch by the Celtics. Miami has some of its best defensive lineups on the floor that are making a significant impact, but that's no reason to stop running offense. Especially on that last iso by Jayson Tatum. Just feels like the Celtics are settling. https://t.co/HNeWSenl5f

Tatum had a chance to win the game at the end of regulation. Walker dished the ball off to him with just over six seconds left. Instead of making a move, he let the clock sink even closer to triple zeroes as he is well beyond the arc. There’s only one move left he can do with little time left and his long-range triple hits the front of the rim as the Celtics couldn’t capitalize on a terrific opportunity.

Tatum used a different approach at the end of overtime with the Celtics trailing by a basket and Tatum’s aggressiveness would have paid off if Bam Adebayo didn’t come up with a sensational block.

“I like both shots that I got,” said Tatum, who scored a game-high 30 points but went 2-for-10 from the field in the fourth quarter and overtime. “I just missed one and (Adebayo) made a great play at the rim on the second one. I just take whatever the defense gives me.”

Their lack of execution on offense in the game’s most critical moments has been an alarming trend over the last few games for the Celtics. It has also exposed their inability to close out games.

Smart said “it’s something that can be fixed,” going forward or it just might be the fatal flaw of this Celtics team.

WWE Had To Talk With Sami Zayn About Being Annoying Backstage

Spurs fans comments before AND after 1-1 Newcastle United draw – Some classics!