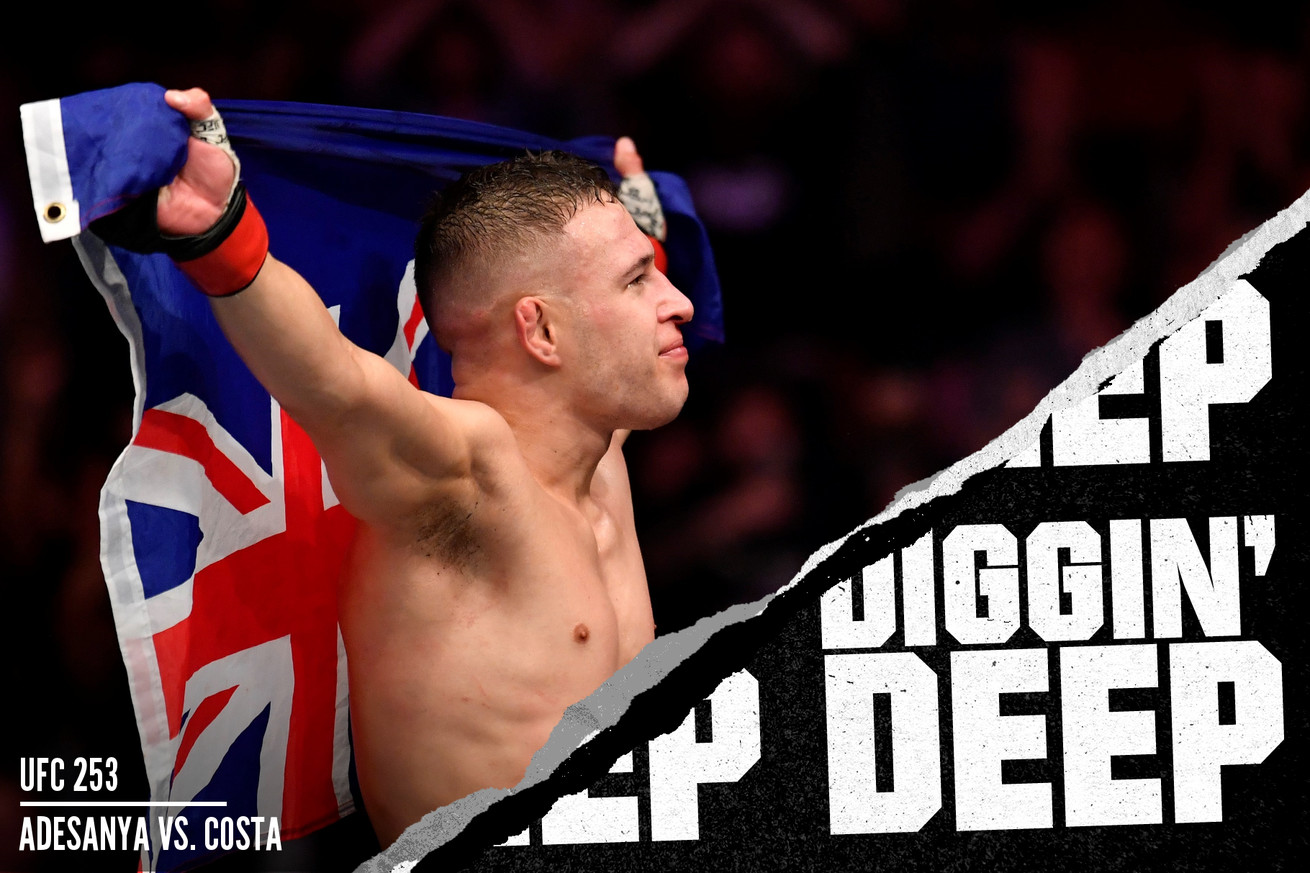 Get the goods on the opening main card contests, including a surefire barnburner between slugging Kiwi Kai-Kara France and submission specialist Brandon Royval at UFC 253 this weekend.

A lot of shade has been thrown at UFC 253 for its lack of depth. Even though I have an appreciation for the main card fights beneath the co-main event, I have to say the shade is well deserved. Sure, two of those contests will have an impact on the top ten of their divisions, but that’s because men’s flyweight and women’s bantamweight are two of the shallowest divisions in the UFC. No, they aren’t as pathetic as women’s featherweight, but I’d say it’s fair to say there isn’t another division in the organization with less depth.

The other fight to round out the main card features featherweight competitors, a division that’s one of the deepest. However, last time I checked, few were calling for Hakeem Dawodu or Zubaira Tukhugov to be getting prime time positioning on a card. If they consistently turned in exciting performances, perhaps I’d be a bit more optimistic. Not saying these fights are going to be crap – I fully expect either Kai Kara-France and/or Brandon Royval to earn a performance bonus – but I’ve generally believed PPV’s should be held in a higher regard. Then again, this is the age of COVID….

It isn’t hard to imagine Kara-France was a big reason Uncle Dana ultimately decided to keep the flyweight division around. An exciting brawler in a division that’s more known for hit-and-run tactics, it’s a bit of a surprise he only has a single FOTN bonus in his five UFC fights. While Kara-France doesn’t have the athletic ability of the average UFC flyweight, he’s been able to find success with his durable chin, heavy hands, and exceptional takedown defense. In other words, he’s pretty much the flyweight version of what Uncle Dana wants out of a flyweight.

The Achilles’ heel of Kara-France has long been known: his grappling. That isn’t to say he hasn’t made improvements on the mat – he hasn’t been submitted since 2014 – but part of the reason the ground hasn’t been as troublesome for him is his beefed up takedown defense. He’ll want to exercise every option to stay standing as it’s plausible Royval is the best submission specialist he has faced in his career. Royval isn’t the most technically clean grappler – he’s definitely submission over position – but he’s resilient enough to make the risky strategy work. He’s doesn’t need to be working from top position either, owning perhaps the most dangerous guard in the division. Given he’s a single fight into his UFC career, that should carry some weight.

It’s no surprise Royval’s risky nature carries over onto the feet, defense being a complete afterthought. His success rate with his high-risk strikes hasn’t been as prominent as it is on the mat, but it would probably be detrimental to his nature to try and train it out of him too much, especially given he hasn’t been finished yet in his career. Then again, much like Royval being the best submission threat Kara-France has face, Kara-France appears to be the best power puncher Royval has faced.

Outside of John Lineker’s heyday at flyweight, this contest feels about as much of a sure thing for a finish at 125. It’s hard to believe Kara-France has the antidote to Royval venomous ground game should the fight spend significant time on the mat. On the flip side, Kara-France’s discipline on the feet seems like the perfect foil to Royval’s reckless standing attack. So, what’s the difference? Kara-France appears to largely be a finished product while Royval’s ceiling appears to be much higher. In a contest this well matched, I’ll go with the fighter with more potential. Royval via submission of RD2

Originally scheduled to be a contest between Vieira and Marion Reneau, a late injury opened the door for Eubanks to make a quick turnaround, having competed just two weeks earlier against Julia Avila. Making excellent use of her vaunted ground chops, Eubanks turned in what may have been the best performance of her career, coming thisclose to securing the first finish of her UFC career with a couple of near submissions. A pair of factors came together to make this possible. First, Eubanks nearly got sucked into a nasty brawl with Avila. Fortunately, before it was too late, Eubanks did what she needed to do to get out of those situations, most notably resorting to her ground attack. Secondly, her conditioning, a problem at various points, held up better than it ever has.

If Eubanks can continue to fight smart – i.e. avoiding brawls and playing to her strengths – and stay strong towards the end, she could become a dark horse in the division. There’s still some work to be done on the feet, but she has the power and the strike variety to be a problem. Unfortunately for her, Vieira may have the exact skill set to shut her down. The Brazilian is one of the larger bantamweights on the roster with a smothering ground game. Given Eubanks is on the smaller side for 135, that could be a major problem.

That hardly means Eubanks was foolish to take this contest. Vieira certainly has holes that can be exploited. Possessing a penchant for launching heavy leather at her opponent, Vieira can be countered by a skilled striker as Irene Aldana showed. Whether Eubanks is another who can take advantage of that is unknown. Typically, Vieira has preferred to close the distance and operate in the clinch where she can effectuate her takedowns. She had problems doing so with Aldana. Was it because she was rusty after a long layoff from knee surgery? It didn’t look like it, but she wasn’t exactly a speed demon to begin with anyway.

Eubanks has been in this spot before: coming off an impressive win, looking like she’s about to bust through, only to blow it up one way or another. I suppose what makes this occasion different is she isn’t coming off a win over Roxanne Modafferi. In all seriousness, the X-factors here appear to be working against her. Not only is she doing a quick turnaround – something that is generally a no-no for someone who has had conditioning issues in the past – she’s doing so while flying halfway around the world. Plus, Vieira is four inches taller. The reach difference isn’t as large, but height certainly does make a difference in the striking battle. It’s too big of an uphill climb for Eubanks for me to feel comfortable picking her. Vieira via decision

Some are having a hard time getting a feel for Dawodu. No one has ever debated his talent, entering the UFC with heaps of hype. After dropping his UFC debut, he’s come back strong, securing four straight wins in the process. However, Dawodu’s opposition over that win streak hasn’t been exception, owning a combined UFC record of 6-11. That wouldn’t be an issue if Dawodu was blowing them out of the water, but there have been two split decisions in the streak and only a single KO. Given his power have been highly vaunted, it has to be worrisome. If he can’t get lesser competition out of there, what are the odds he can take out stronger compeititon?

Even with those concerns, Dawodu is still one of the more gifted athletes in the division, in addition to being one of the most technical strikers. The lack of KO’s is more likely attributable to him playing it safe than anything, preferring to minimize the risk of eating a finishing blow of his own. It doesn’t take too many blows to his opponent’s legs before Dawodu’s low kicks begin affecting their stability. His grappling still doesn’t appear to be anything special, but his ability to keep his opponent at bay has helped his takedown defense remain sturdy.

Regardless of how Dawodu’s takedown defense has been thus far, it hasn’t been tested by anyone with the takedown chops of Tukhugov. The longtime teammate of Khabib Nurmagomedov, Tukhugov doesn’t have the wrestling chops of Khabib – no one does – but he’s still a more than a handful in that aspect. The question is whether Tukhugov will look to go to the mat. Sometimes he falls in love with his striking and doesn’t consider going back to his base. It isn’t that Tukhugov is bad on the feet. He does a solid job of using his length with his jabs and kicks in addition to surprising power. It’s that he tends to be somewhat loose defensively.

Kudos to the UFC matchmakers. Neither Dawodu nor Tukhugov has had their breakthrough moment, but appear poised for that moment. Dawodu’s tendency to play it safe on the feet could very well be the perfect foil for Tukhugov’s aggressive approach… provided Tukhugov doesn’t look to wrestle. Then again, the Russian has also gassed himself when he goes in heavy pursuit of takedowns. I’ve gone back and forth, ultimately landing on Dawodu to take a clear decision over the durable Tukhugov. Dawodu via decision

Where to find Liverpool vs. Midtjylland on US TV and streaming