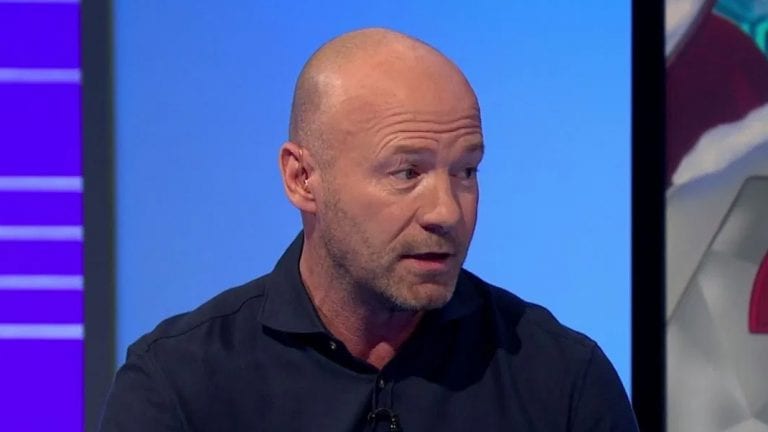 Alan Shearer watched on as Manchester United hammered his club.

Forget when the goals were scored, this was an embarrassing display from Newcastle United.

With 28 shots and 14 on target, Manchester United had more shots than any other Premier League club have had this season in any match, whilst you have to go back to 2015 to find when Man Utd had more efforts on target than they did on Saturday night.

However, he refused to mention the biggest issue / problem that contributed to the result and especially the performance.

Against a team low on confidence and conceding goals for fun, 11 in their first three games, Steve Bruce bizarrely but all too predictably went for the most ultra defensive formation and tactics possible.

This allowed the visitors total control and inevitably led to chance after chance, Bruce’s tactics meaning the likes of Mata and Fernandes able to advance to the edge of the Newcastle box at will. The flat midfield five sitting so deep and easily passed through with such big gaps between opposition players, naive tactics making it so easy.

Mata has so little pace but if you give the 32 year old the freedom of the midfield and allow the Spaniard to advance to in and around your box without even having to really try, you are all but ensuring your own downfall.

We all know Alan Shearer is best mates with Steve Bruce but surely you couldn’t talk about and analyse Saturday’s match without referencing the NUFC Head Coach’s part in it, because the fact is, it was Bruce’s contribution that was the biggest factor.

You can pick out individuals in the Newcastle team who were poor but when your only tactics are for the whole team to defend so deep, then if they get possession give the ball to ASM or boot it up the pitch, it is simply embarrassing to watch.

The team selection shocking as well, with Manquillo, Almiron and Fraser left on the bench, with Krafth, Hendrick and Joelinton so poor.

Alan Shearer advised / pleaded with Steve Bruce not to take the Newcastle United job, he should have listened for all our sakes, especially Alan Shearer’s.

Alan Shearer speaking on Match of The Day:

“First of all, really disappointed with Newcastle, was a poor performance.

“I thought the set-up to soak up the pressure, they got the goal and then they just went back and sat back.

“They couldn’t get anyone on the ball, kept knocking it long, ball kept coming back into them and I thought they were really, really poor.

“From a Manchester United point of view, I think Ole Gunnar Solskjaer deserves credit for changing the team.

“That team had to be changed after the last performance that they had.

They did that and they played very very well and they absolutely battered Newcastle I thought.

“They dominated possession and Mata and Fernandes were so clever because they just went and stood in those little pockets, in the holes in front of Newcastle’s back four, Newcastle couldn’t handle that.

“They [Man Utd] were just too good on the ball, they showed a lot of creativity, everything Newcastle didn’t have.

“A brilliant ball in for Harry Maguire [for the equaliser] from Mata, Maguire to get his goal.

“But those two [Mata and Fernandes] on the ball, if you give them the amount of time that Newcastle gave them, then they are going to punish you and cause you problems all evening as they did that.

“The one player that deserves credit in Newcastle’s team I thought was Darlow because he kept the score down.

Stats in brackets are from half-time:

Haney and Garcia both say they want Teofimo Lopez in 2021